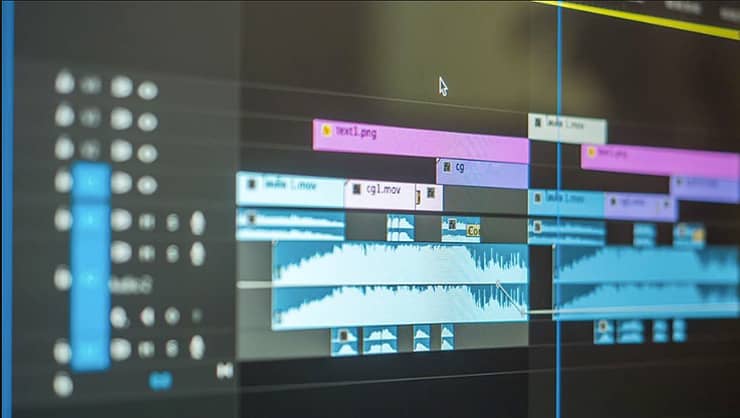 At this point, you know all the ins and outs of the preproduction process in working with a video production agency. You’ve played a part in developing the script, storyboard, and concept of your video. You’ve either been an on-camera star during production or were able to watch it being filmed (how cool is that!) What’s left? The part where we take everything back to our offices and edit away. This stage is post production, which is the final process when working with our video production agency.

The simplest way to explain the post production process is to use the metaphor of a puzzle. In ‘post,’ we pour out all the puzzle pieces (the footage from what we’ve just shot) and begin assembling them into something cohesive and polished. We call this cutting the footage, and it’s done with the use of video editing software. Cutting is more important than people may realize. Even a straightforward testimonial shoot might still have had the occasional wrinkle–maybe a funky word choice, or a cough, or a moment when someone needed a drink of water. Knowing that post production is a part of the process means less stress when something like this happens on set; everyone takes comfort in knowing that we can adhere to the old adage and “fix it in post.” While editing, we look at the various takes (we often film the same part of the script more than once) and choose the best of them. We also make it more digestible, arranging the video in the clearest and most interesting order. If the shoot is something other than a testimonial or product shot, for example if there were actors or a host, this is our opportunity to let the funniest or most heartfelt moments come through in the video. In fact we often have a sense during production of which takes are the best options; you might hear a director say, “Mark that,” meaning, “This is the good stuff, so let’s remember it.”

Side note: Remember in the preproduction blog we used a term called storyboarding? These storyboards continue to be used as a reference all the way through post production, to make sure we’re putting the clips in the right place.

Now we’ve found all the juicy parts and finished cutting your video together. The next step is finding music that fits with the general vibe of the video, as well as adding in animation and special effects. In the case of animation, our team has been hard at work drawing throughout the preproduction and production phases and now the end result is incorporated into the video. Special effects are those details that give the video that extra visual appeal–things like graphics, title screens, spinning imagery and filters. In most cases, these extra visuals mean that every one of our editors is hands on with a client’s project: some are cutting the video while others are perfecting the animation or creating the special effects that are unique to each video.

While we’re in post, our head of post production and the production team have direct contact with the client to relay the progress of the video and ask or answer any questions that come up on either side. The client is the first to see the initial edit of the video, offering any suggestions and providing helpful feedback.

After this first pass, we incorporate the notes and then send it back for the final pass. Once those changes have been made, our team colors and sound mixes the video. Our wizards match color across the entire video to make it look cohesive and mix the sound to make sure the voices are at the same volume and the music isn’t overpowering. In both cases, you’d never know the work was done–unless it wasn’t, and then you’d definitely notice. This sweetening is the final stage, and once it’s done the video is delivered to the client in all its iterations: shorter cuts for social media, longer cuts for onboarding, marketing, and anything else the client has stipulated. We take pride in making the entire process, from preproduction all the way through post, as straightforward and user friendly as possible. If you’d like to get a feel for yourself of just how easy and fun we make it, get in touch today by calling 208-336-6594 or emailing info@frontrunnerfilmsllc.com and let’s get started on your video.